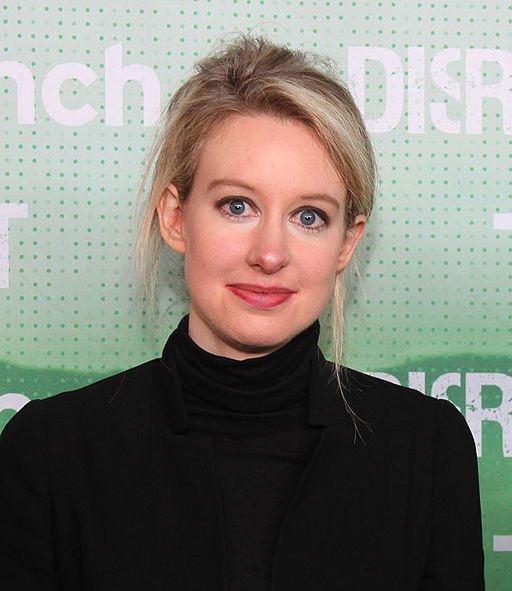 I just finished Bad Blood: Secrets and Lies in a Silicon Valley Startup by John Carreyrou. Wow. I remember hearing about the fall of Theranos and their billionaire leader and founder Elizabeth Holmes, but I didn’t know much more than the headlines. I couldn’t get enough of this story and have been thinking about it for weeks. This story has it all; lies, deception, fraud, big-name investors, visionary Silicon Valley founder and plenty more plot points.

Bad Blood isn’t shy about portraying Elizabeth Holmes as a ruthless, do-whatever-it-takes leader who purposefully misled investors and put customers in danger. I struggle reading books like these sometimes. It’s hard to know how terrible someone really is. Is Elizabeth Holmes a bad person? Most likely. Was she blinded by ambition and success? Yes. Did she lead a company built on a foundation of lies and cover-ups? Yes. I believe she has great strengths that could have been used for good. But at some point in her life, she let success blind her ethics.

This book documents the rise and fall of Theranos and it’s young CEO and founder Elizabeth Holmes. It is authored by John Carreyrou, who is an investigative journalist for the Wall Street Journal. Carreyrou did an investigative piece for the Journal in 2015, which was the first to speak about the corrupt and fraudulent practices of Theranos. At the time of the article, Theranos and Elizabeth Holmes were at the top of the business world and were valued at over 9 billion dollars. Holmes owned more than 50% of the company and was featured on Forbes’ wealthiest persons list. Bad Blood expounds on Carreyrou’s investigation with over 150 interviews with those who either previously worked for or were close to Elizabeth Holmes and the company she founded.

Bad Blood begins in 2006 when Elizabeth Holmes is only 22 years old and she fires her chief financial officer, Henry Mosley. He had just learned that the product, Theranos, was marketing to investors didn’t actually work. To mislead investors Holmes had her team play pre-recorded videos that gave the appearance of a working blood draw machine. When Mosley confronted Holmes after learning this stunning fact Holmes replied that he was not a ‘team player’ and needed to leave.

We get a brief summary of Holmes’s childhood. She grew up in Houston where her father moved her family to take a position as a Vice President for Enron. Someone Carreyrou interviewed told an account of how when asked about what she wanted to be when she grew up Holmes always answered “a billionaire”.

She attended St. John’s School in Houston, which is considered one of the top charter schools in the nation. Wes Anderson (a St. John’s alum) filmed his famous movie Rushmore on the campus of St. John’s.

Eventually, she found her way to Stanford where she was pursuing a major in chemical engineering. After only one year at Stanford, she decided to drop out and to form a company called Real-Time Cures, which later became Theranos. According to Carreyrou, Holmes spent five days of intense concentration coming up with the initial design of a lab-on-a-chip patent.

If you are not familiar with the machine that Theranos created here is a quick summary.  They invented a machine called the Edison which would work as a mini blood lab. The idea is that the machine could bypass the traditional lab and send results directly to a patient’s doctor in real-time. The big pitch was that Theranos could test blood with 1/100th-1/1000th of the blood normally needed for tests. Further, Theranos claimed that with that small drop of blood they could perform over 200 types of tests. Theranos wanted to disrupt the lab testing industry, which could have been a very lucrative undertaking.

The only problem is it didn’t work. The physics were impossible. Ken Auletta had written an article for the New Yorker, saying Elizabeth Holmes’ explanation for how the machine worked was “comically vague.” Yet, Holmes was still able to convince investors to invest some 900 million dollars into Theranos with these comically vague explanations.

A large portion of the book details the many people who were duped into believing Holmes smoke and mirrors routine.

Probably the greatest strength Holmes possessed was her ability to persuade and command the respect of those she met. It sounded similar to Steve Jobs’ famous ‘reality distortion field’ in which you would believe everything Holmes said while you were around her, even if it was outright impossible.

Some of Holmes’ biggest believers were members of the board at Theranos. Part of the reason Theranos was able to last for a decade was the strength of the board and investors. An article in Forbes described Theranos as having “the most illustrious board in U.S corporate history.” They were former Secretary of States Henry Kissinger and George Schultz, one of the most powerful lawyers in the country David Bois, General Jim Mattis (before he served as Secretary of Defense), and a handful of other powerful government and corporate leaders.

So who invested in Theranos? Some of the biggest investors in Theranos were The Walton family, Rupert Murdoch and the Devos family.

George Schultz was one of the biggest backers of Elizabeth Holmes. His grandson, Tyler Schultz, played a pivotal role in bringing the Theranos fraud to light. The book highlights the relationship between Tyler and his grandfather. Tyler was a one time intern at Theranos and brought up Theranos’ deceptive practices up to his grandfather, but George Schultz always sided with Elizabeth. Schultz is quoted as saying, “They’re [Theranos] trying to convince me that you’re stupid. They can’t convince me that you’re stupid, but they can convince me that you’re wrong. And I do think that you’re wrong, so move on with your life.” Theranos’ lawyers were sent after Tyler to silence him (they knew he had been leaking information to the Wall Street Journal), and Tyler’s parents spent over $400k in lawyer fees to defend Tyler. As of 2019, it appears that Geroge and Tyler have reconciled their differences.

Reading books like these scare me sometimes. I would describe myself as being driven and ambitious. How can I have safeguards to ensure I never let my ambition blind my ethical reasoning. Clayton M. Christensen’s book How Will You Measure Your Life spends a third of the book talking about how you need to consider the question, how will I stay out of jail? The thought is that if you haven’t prepared yourself to face ethical dilemmas you may choose wrongly at some point.

Leadership is always important in a company. There were so many instances in Bad Blood where I cringed at the terrible examples of leadership from Elizabeth Holmes. The employees were working in a state of fear, and employees being fired became a common occurrence. Holmes appointed Sunny Balwani as the president and chief operating officer for Theranos. Not only were they living together but they never disclosed this to investors. Many of the stories in Bad Blood revolves around the leadership of Sunny. He was paranoid and monitored employee emails and tried to use fear and intimidation to get his way. I believe a lot of the culture issues at Theranos stemmed from Sunny. But Holmes is the one who put him in charge.

Another take away from this book is that wealth can blind investors from making rational decisions. I would think the rational thing to do after hearing Elizabeth Holmes’ sales pitch would be to make sure that the technology worked. But I think the promise of a machine that could change the world and be the means of disrupting a whole industry convinced many investors into just believing everything Holmes said without doing due diligence. This is also a story of wrongly believing others. Investors flocked to Theranos and other investors didn’t want to miss out, so they followed along. They figured if so many people were investing and believing in Theranos then I should too.

After reading the book I decided to watch the HBO documentary called The Inventor: Out for Blood in Silicon Valley which was released in March 2019. The documentary was interesting. I thought that the pacing was a little weird and odd at the beginning. Most of the first half of the documentary is footage of Elizabeth Holmes modeling and walking through Theranos’ headquarters. But overall, it’s a good next step after reading the book.

I loved this book. I plan on reading it again someday. If you have any interest in Elizabeth Holmes and Theranos I recommend checking out this book. If you don’t know who they are but have an interest in business, fraud, or leadership (you can sometimes learn more about leadership from bad leaders than good leaders) you should check it out.

You can pick up a copy here.