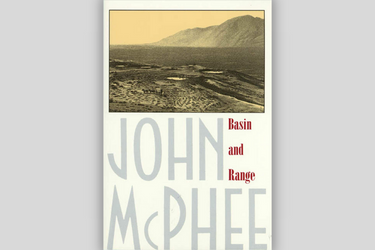 John McPhee’s Annals of the Former World is a five-book masterpiece of geology. The series was awarded the Pulitzer Prize in 1999.

Basin and Range is book one in the series. Basin and Range is a term for landscapes that have parallel mountains and valleys. The Great Basin in the Western United States is one of the best examples of this type of topography.

One of the major themes of this book is the radical new (at the time) idea of seafloor spreading. This controversial theory shook the geology world in the 1960s. The idea is that new earth crust is created in the oceans at midoceanic ridges and pushes outwards from there. This process explains continental drift and plate tectonics. If McPhee had to sum up the book with one sentence he said it would be this: The summit of Mt. Everest is marine limestone.

McPhee tells many kinds of stories in this book. It’s partly a travelogue of trips he took with a geologist through the Great Basin along I-80. He explains Earth’s processes that formed the landscape he sees along the interstate.

But he also tells the stories of geologists today. They don’t all see geology the same. A new idea like seafloor spreading is not universally accepted all at once. Many geologists even fought against it.

One of my favorite parts of the book is when McPhee talks about “deep time,” his term for explaining geological time. It is the best example I’ve read of comprehending large-scale time frames that are counted in millions or even billions of years.

Do I recommend this book?

I’m not a geologist, but I had a great time reading this. However, I’ve always had an interest in the Earth and its processes, so I may be a little biased. The writing is phenomenal and for a book about rocks, I think it can hold many people’s interest.