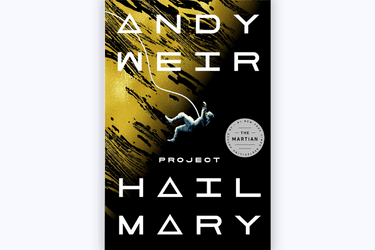 I just finished reading the book Project Hail Mary by Andy Weir. The book was released only a few weeks ago on May 4th, 2021.

This is Weir’s third book. He is most known for his book The Martian, which was later adapted into the 2015 movie of the same name.

Interestingly enough, Project Hail Mary may soon be heading to a theater or streaming service near you. Variety reported that Ryan Gosling will produce and star in an adaptation of Project Hail Mary (Variety Article).

Project Hail Mary is only the second book I’ve read by Weir. I read The Martian shortly after watching the movie. The book was hit and miss for me. I enjoyed the story and the character of Mark Watney. However, I was surprised by the language in this book. As I’ve gotten older, I try to stay away from books with excessive profanity. It’s hard to find books that don’t swear, and I do still read books with swear words, but in The Martian, it was very pervasive. According to a New York Times article, there are 160 swear words in the book (it seemed like much more), including the F-word which is dropped twice in the first three sentences. I found out there is a “classroom edition” that Andy Weir published that has the profanity cleaned up. I should have read that one!

My first hesitation about reading Project Hail Mary was that it might be filled with profanity. But this is not the case. There is some profanity, but compared with The Martian, it is very clean.

Project Hail Mary is about a man named Ryland Grace who basically wakes up in space with no memory of who he is or what he was doing in space. His surroundings are odd and unfamiliar, and his crewmates are dead.

What he doesn’t know is that the fate of humanity rests on his shoulders. The book is basically him remembering who he is and figuring out what he needs to do to save the World. It includes flashbacks that lead up to him being in a spaceship and him working to save the World.

Is Project Hail Mary as good as The Martian? In many ways, they are very similar. They are both stories about a man, who is stranded from civilization; Watney on Mars, and Grace in a spaceship. Both men have the entire world watching them or thinking about them. Both are scientists. However, Project Hail Mary is The Martian on a much larger scale. The ideas are bigger and more ambitious. Overall, I would say I liked Project Hail Mary more than The Martian.

I really enjoyed this book. There were times where I thought the book was a little silly. I thought Eva Stratt, the leader of Project Hail Mary was unrealistic, and I didn’t know if I was supposed to like her or hate her. But overall, it’s a fun journey. I really liked the character Rocky and felt like he added a lot to the story. I recommend reading Project Hail Mary!

If you are interested in reading and purchasing Project Hail Mary you can purchase it from Amazon here.