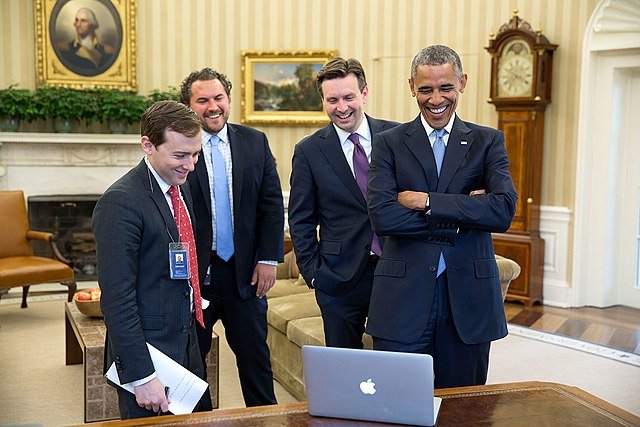 President Obama’s use of humor was vital to his popularity during his presidency. He owes a lot of his funniest moments to presidential speechwriter David Litt.

Thanks, Obama: My Hopey, Changey White House Years, is David Litt’s memoir of his time in the White House. Litt, like most of Obama’s staff, was only in his twenties while he worked for the president. He worked as a senior presidential speechwriter and he was the lead writer for four of President Obama’s White House Correspondents’ dinners.

The book is a look at Litt’s life during the Obama presidency. He was a recent Yale graduate who was swept up by Senator Obama’s campaign. He joins the campaign and spreads the message of Obama in Ohio. He admits to being a little naive during this time, as he was caught up in the myth of Obama, which he defines as the belief that Obama was “the best possible version of a human.”

After Obama wins the election, Litt goes to Washington D.C. and finds his way into the White House, eventually joining Obama’s speechwriting team. For most of Obama’s first term, Litt had little interaction with the President. However, in the second term, he is given increasing opportunities to write Obama’s speeches, especially when a joke was needed (Litt interned at The Onion, and was the head writer at Funny or Die).

Throughout the book, Litt highlights memorable Obama moments, many of which Litt provides some behind-the-scenes color. Youtube was a constant companion while I read, as I watched what seemed like hours of clips from Obama’s presidency. Some of my favorite clips, which Litt writes about were:

Many of the memorable Obama moments above were seen by millions through social media. Obama was president during social media’s growth. In 2008, when Obama was president, social media was crawling and learning to walk, but eight years later, when Obama left office, social media was sprinting. Litt talks about some of the struggles of speechwriting in an era when a small throw-away sentence can be trending on twitter an hour later, but also how important of a tool it was to get the message out, especially about Healthcare.gov.

This was an enjoyable read. Litt is a skilled writer, and his unique humor is displayed on every page. I laughed audibly a few times while reading his witticisms. David Litt knew what his role was in the White House, and he doesn’t claim to have been a powerful member of the White House staff. In a New York Times interview, he said, “American history would have been totally the same without me, except for a couple of jokes. And I am very proud of those jokes.”

You can pick up a copy of Thanks, Obama from Amazon here.