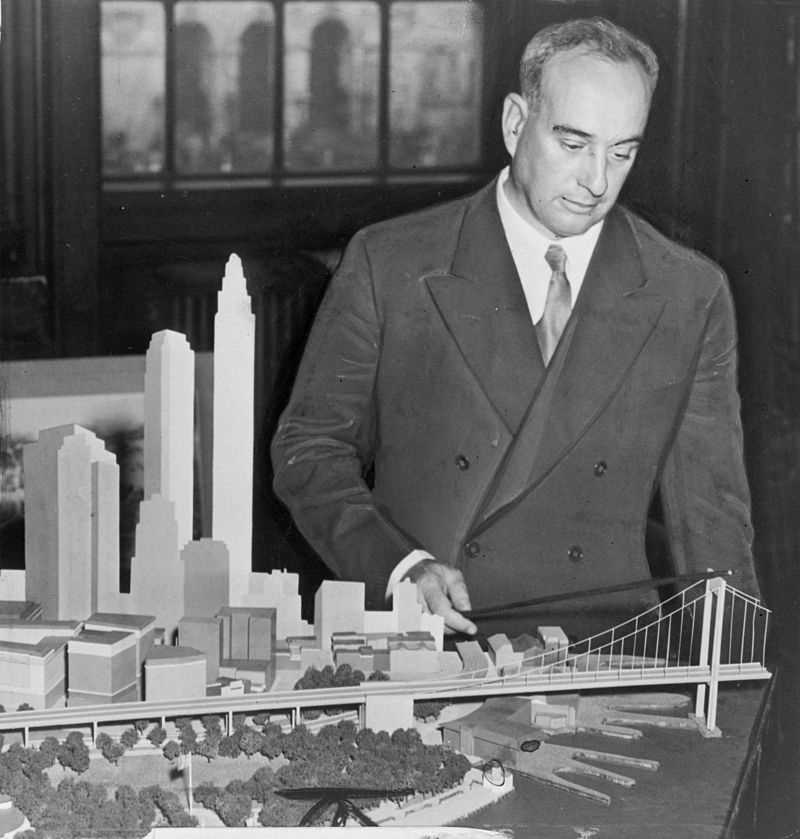 Confession: I have never been to New York City. But I just finished my second book about urban planning in and around New York City. The first book I read was The Death and Life of Great American Cities by Jane Jacobs. A few days ago I finished the Pulitzer Prize winning book The Power Broker written by Robert A. Caro. This will go down as one of the best books I have ever read.

Move over The Brothers Karamazov, The Power Broker is now the longest book I have ever read. Coming in at 1,336 pages. Was the time it took to read this book worth it? Yes! After finishing it, I was tempted to read it again, just so I could cement the things I learned.

The Power Broker is about Robert Moses who was one of the most powerful men in New York City history. He shaped the city more than any other man; laying out highways, building bridges, constructing public housing, erecting parks, and building other large public works (see below for a list of his accomplishments). For years the media looked at Robert Moses as ‘the Master Builder’ and lauded his accomplishments. Governors, mayors and even a President of the United States yielded to his power.

Yet, for the forty-four years, he was in power he never once was an elected official. In the United States, political power was supposed to be gained through the democratic process. In many ways, our democracy was built to not let someone like Robert Moses (i.e., an unelected official) amass so much power without the consent of the voters. The Power Broker is an attempt to understand how Robert Moses was able to gain so much political power.

The book is thorough (hence the 1,336 pages), but it is not verbose. Caro commented that he cut three hundred and fifty thousand words from the book, which he regrets. It takes so many pages to tell the story because Robert Moses was a complicated man who little by little over forty-four years amassed supreme political power. With this power Moses got things done. He was turning out public works faster than any other person in history. Many of these projects are highlighted in detail in the book.

What I Learned from the Power Broker

Some highlights of the lessons I took away:

A Man Burning with Ideas

My favorite description of Robert Moses was that he was a man burning with ideas. A woman who knew him in his twenties described him as such. She said they would walk through the city and Moses would point to empty lots and would lay out his vision for what they could be. Caro even mentions that before he had been in a position of power he had laid out his plan and vision for the city of New York. Forty-four years later he had accomplished most of what he had set out to do.

I love the idea that someone can be passionate about a subject, and the more they think through it the more they become burning with ideas about their subject. Moses amassed great power so that he could implement his ideas. It’s thrilling to think that his master plan was thought through before he was even in a position to accomplish it.

The Sacrifice of His Public Works

Simply stated, Moses was a man who got things done. But at what cost? There was a dark side to the public works of Robert Moses. There are no official numbers, but it is estimated that Moses displaced close to half a million people so he could build his roads, bridges, public housing, and parks. The half a million people were mostly made up of marginalized groups in the city. When they were evicted from their homes they often had nowhere to go even though adequate and affordable housing was supposed to be provided for those who were forced to leave.

There is one example of Robert Moses building an expressway on Long Island. His plan had the road cutting through a poor family’s farm. The farm was a very small lot and it was not all productive land. The road was to dissect the farm into two small lots, which would require the family to make 15-20 minute trips just to get to the other side of their farm. The family petitioned Moses to move the road just a tenth of a mile to the unproductive part of their farm, but he told them the engineers said it couldn’t be done. However, this wasn’t true, the real reason Moses was even building through this family’s farm was that he was avoiding a golf course owned by a wealthy acquaintance. He would do whatever it took to please the rich, but he wouldn’t do anything for those who had no power or wealth.

The book has numerous more examples of individuals and families who were affected by the political power of Robert Moses. The author said he couldn’t tell the story of Robert Moses without learning and writing about the experiences of those marginalized groups who were at the mercy of Robert Moses’ power.

The Downside of Power

Before Robert Moses was appointed to as park commissioner he was a young idealist. He dreamed of a more perfect bureaucratic system, where only the most capable could advance. When he was young, he tried implementing such reforms but nobody liked it.

At some point during his reign, I believe Robert Moses began to do all things in the pursuit of power. He learned how to fill holes in the American political systems. Holes, which when filled, aggregated to almost limitless unchecked political power. It’s amazing to me that this single man could evict half a million people from their homes and command billions of dollars of public money.

His reputation began to diminish in the 1960s when his pride led him to pick battles he couldn’t win. He tried to bring down Shakespeare-in-the-park. He planned on removing a playground in Central park so that he could build a parking lot for the Tavern on the Green restaurant. There was a lot of opposition to removing the playground, so he ordered his build team to work in the middle of the night. Luckily, someone reported the noise they heard and they stopped demolishing.

Another unfortunate legacy of Robert Moses’ rule was the use of roads. Highways, expressways, and roads were at the top of Moses’ list of projects. To him, the road ruled supreme. The irony of this was that Robert Moses never learned to drive and never drove. Caro, strongly believes, that Moses’ obsession with roads stemmed from the idyllic scene of 1920s car rides on Long Island, when only a handful of wealthy residents had access to a vehicle. Because he never drove, he never realized that that was not the way things were anymore. Every bridge and highway was supposed to be the means of ending the commuting nightmare, but with every completion, more cars seemed to fill the roads.

He purposefully used all his political power to ensure that public transportation would be hampered in New York City. More roads meant more tolls, and more tolls meant more revenue to fund Moses’ projects. When Robert Moses came into power, New York had the greatest subway system in the world, and when he left power, it was counted among the world’s worst.

Now, I’m not a car-free movement sympathizer, but it’s obvious that cars don’t work in the high population density boroughs of New York City. With the political power Robert Moses had there was an opportunity to use the funds to build public transportation at an unprecedented rate.

The Power of the Press

The press played a critical role in how Robert Moses gained his power. During the 1930s, the New York papers were unanimous in their constant praise of Moses and his public works projects. During these depression years, Moses’ ability to get things done was a beacon of hope and light to the city. However, 100 percent approval of the media meant that none seemed to ask questions about his unchecked power and policies. Because New York City was the media capital of the United States, Robert Moses’ heroics were published all over America. Universities praised him as the greatest public servant of the era.

But what if the press is wrong? What if the media takes everything at face value? For years, Robert Moses was displacing families in very inhumane ways. No one seemed to be asking any questions about his policies and works. Journalists play an important role in educating the public about issues that affect their reader’s lives. With so many voices in today’s society, I think it would be much harder for unanimous support of any topic, but I will be more skeptical about what voices I listen to.

I stand in awe at what Robert Moses was able to accomplish (see below for a select few of his accomplishments). After reading The Power Broker, I have a more complete idea of what power can do to a person. I feel the need to read the book again so I can more fully learn it’s many lessons. Personally, I don’t think of Moses as an evil person, and I believe he did a lot of good for New York City. I strongly recommend this book to everyone. You can pick up a copy with this link.

The New York Sun, in 2007, estimated that in 2007 dollars, Robert Moses spent around 150 billion dollars on his projects. For those of you who don’t know what Robert Moses did hear is a shortlist of his major accomplishments:

3 thoughts on “The Power Broker: Robert Moses the Most Powerful Park Commissioner of All Time”