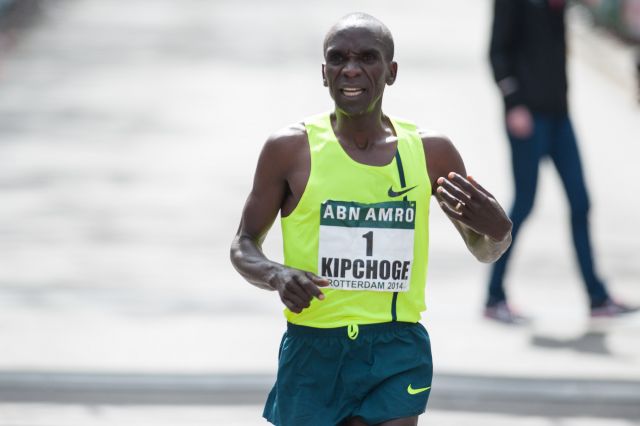 On October 12, 2019, at 11:15 PM, I was sitting on my couch for the start of the Ineos 1:59 challenge. Halfway around the world in Vienna, Austria, the timers began as Eliud Kipchoge started his attempt to break the sub-two-hour marathon.

I watched the entire event. Emotion overtook me as I watched the final minutes of the race. Kipchoge was orchestrating a perfect run. It was clear to everyone that he was going to break running’s last great barrier.

Two minutes away from the finish line, Kipchoge passed his pacing team as he exploded to the finish. As the crowd cheered him on, you could see the emotion growing on Kipchoge’s face. He crossed the finish line with a time of 1 hour, 59 minutes and 40 seconds. I have watched his finish dozens of times.

I find great strength from watching remarkable athletic performances. I watch them over and over again. I watch Kobe’s 81-point game, Klay Thompson’s 37-point quarter, Tom Brady’s Super Bowl LI comeback, and Eliud’s sub-two-hour marathon performance. Each time I watch them I feel inspired and motivated to aim for greatness. I consider the years of training that went into these performances.

Something is different with Kipchoge though. As I’ve reflected on him, and his stunning accomplishments, I realized it was Kipchoge himself that I admire. Today I’d like to share a few of the things I’ve learned from studying Kipchoge.

But first, a short bio of his accomplishments.

Eliud Kipchoge was born, on November 5th, 1984, in Kapsisiywa, Kenya. He was raised by a single mother who was a school teacher.

He found success early on as a track runner. In 2001, he met Patrick Sang, a fellow Kenyan, who was a successful runner – Sang won a silver medal at the 1992 Olympics. Sang soon became Kipchoge’s coach and has remained his coach ever since.

In the 2000s, Kipchoge won numerous awards, including two Olympic medals. In 2012, after failing to qualify for the Olympics, he decided to transition from the track to the marathon. Since converting to longer distances, Kipchoge has been on an absolute tear. He has won 12 of the 13 marathons he has entered, including winning the Gold Medal for the marathon at the 2016 Rio Games.

In 2017, he participated in Nike’s Breaking2 event. The event had three runners who trained and worked to break the two-hour marathon barrier. This was very similar to the last major running barrier – the four-minute mile, which had three runners – Roger Bannister, Wes Santee, and John Landy – competing to be the first four-minute miler. Kipchoge won the race with a time of 2 hours and 25 seconds.

He set the world record time for the marathon in 2018, with a time of 2 hours, 1 minute and 39 seconds. This record shattered the previous world record by almost one and a half minutes. Truly amazing, because running records tend to be broken by seconds, not minutes.

On October 12, 2019, he broke the two-hour marathon barrier, although not officially, when he ran a marathon in 1 hour, 59 minutes and 40 seconds. It doesn’t officially count as a world record because it didn’t follow standard completion rules (not an open event). Nevertheless, Kipchoge ran 26.2 miles in under two hours. The barrier is broken.

When I think of Kipchoge a plethora of words come to mind: humble, calm, discipline, focus, endurance, commitment, ambitious, learner. These are traits I want to emulate.

What makes Eliud Kipchoge so elite? I have tried to isolate some of the things that have made Kipchoge elite and will share what I have learned.

“Life in the camp is free of distractions and, for me, it is the perfect training environment”

At 6,857 feet above sea level, Eldoret, Kenya, is where Eliud Kipchoge does most of his training. Around 15 miles outside of Eldoret is the Global Sports Communication training camp, where Kipchoge lives and trains most of the year. He has been training at this camp for almost 20 years. It is a sprawling camp of dormitories, a working farm, and training rooms. Cows and sheep roam freely on the grounds. Runners and other staff live together in the communal setting.

There is a monk-like feel to the camp. The rooms are stark and the walls are mostly barren, Kipchoge hangs a few motivational pictures and quotes in his room, which he shares with another runner. The runners at the camp share in the chores and share meals together. Chores are done on a rotating basis, and yes, even Kipchoge participates in them. There are many videos of Kipchoge cleaning toilets or mopping floors after his runs. Nothing is below him.

Kipchoge is worth millions of dollars, but he has decided to train in a very simple way. At the camp, they eat simple local foods such as ugali. Rice, potatoes, and beans make up a large part of the diet at the camp. They eat white bread and drink copious amounts of tea.

After breaking the sub-two-hour barrier, a reporter asked Kipchoge how he was going to celebrate. Kipchoge answered, “As normal. I don’t go haywire celebrating. I always celebrate in a human way, in a calm way.”

In many ways, Kipchoge lives a very simple life. He is meek and calm. I believe he draws power from the simplicity in his life. It allows him to focus on improving his running.

“Only the disciplined ones in life are free. If you are undisciplined, you are a slave to your moods and your passions.”

Geoffrey Komworor, who recently won the 2019 New York City Marathon, and who trains with Kipchoge, says, “He is always the most disciplined.”

As mentioned above, Kipchoge has won 12 of the 13 marathons he has participated in. Most runners occasionally have bad races, the weather was poor, they had to travel thousands of miles, etc. Excuses are always available for poor performance. However, Kipchoge has had almost no bad days. Through his training, he has cultivated an ability to perform and not make excuses.

With disciplined exactness, Kipchoge logs his training runs. He has been doing this his whole career, and now has 15 notebooks full of all his training. The notebooks contain information on miles ran, impressions on his performance and thoughts for how the next day could be better.

These logs are a testament to his training. A physical reminder that he prepared as well as he could. He has mentioned that even during races he thinks about how much training he has put in. This thinking sustains him during his races.

What a thrilling thought, Kipchoge can choose a random day from 10 years ago, and read about what he did to train that day.

When at the Global Sports Communication camp, Kipchoge keeps an exact schedule. He is up at 5 AM and is asleep by 9 PM.

He takes a daily nap and trains in the morning and afternoon. A lot of the day is spent with his teammates. He says he learns from his teammates as they share ideas during mealtime.

Kipchoge has a great relationship with his coach. Kipchoge was 16 years old when he met Patrick Sang. He asked Sang for training programs and kept coming back to him for more advice.

Sang said, “when you find a young person with a passion, don’t disappoint them. Give them a helping hand and see them grow.” In another interview, Sang said, he reflects back on his decision to help Kipchoge and asks, what would have happened if he didn’t mentor this 16-year old kid? Would the marathon be where it is now? Would the 2-hour marathon barrier be broken?

There is a circle of teamwork around Kipchoge. He has a mentor and coach whom he loves and trusts. His coach acknowledges his gratitude for the success he has been a part of with Kipchoge. At the training camp, there are many inspiring young runners, who idolize Kipchoge. Athlete, coach, and teammate create a cycle of synergy with each playing their role. With time, roles will change, but for now, each gives their all to the team.

“I am a big fan of the writer Stephen R. Covey. I like his books, particularly The 7 Habits of Highly Effective People. His books have taught me so much. They have instilled in me the importance of working hard, treating your profession as seriously as you can and how to live alongside people.”

Kipchoge has a passion for reading. He aims to read for two hours every day. Knowing his feelings about discipline I am certain he consistently reads that much. Along with Stephen R. Covey, Kipchoge is also fond of the book Who Moved My Cheese? and he often quotes Aristotle.

Kipchoge helped set up a library at his training camp. He encourages other runners to read. He said that reading has helped him in his career to develop passion and determination. Books have helped him to understand his role as an athlete.

“No human is limited”

After breaking the two-hour marathon barrier, Kipchoge repeatedly said, “no human is limited.” It has become his catchphrase. He fully believes in those four simple words. After years of pushing his body, he has learned for himself the truth in the phrase.

For over ten years, Kipchoge has repeatedly run over 100 miles a week. Fueled by a belief that he could push himself harder, and that he could break paradigms. The hours of training refined his mind and legs.

I’m grateful for good role models like Eliud Kipchoge, someone who carries themself in a dignified manner. He is a true role model. I’m inspired by his passion. I believe he has many more gifts to give to the sport of running. I’m excited to see what those will be.