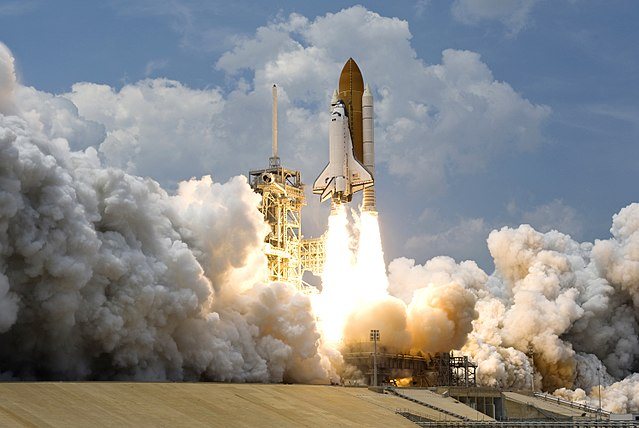 A few months ago, I read Spaceman: An Astronaut’s Unlikely Journey To Unlock The Secrets of the Universe. This book caught me by surprise. I purchased the audiobook during one of Audible’s Daily Deal sales. It had a high customer rating and sounded like an interesting read. I wasn’t expecting to love the book as much as I did.

Massimino is a loveable and personable man. Watch an interview of him and you’ll immediately see his charm and humility. He is a great example of endurance and overcoming challenges. As I read the book I felt inspired to take greater charge over my own life.

I want to share a few of the highlights and lessons I learned from Spaceman.

You Can Turn Any Situation Around

I want to start with this theme. The first half of the book is about Massimino trying, and often failing, to become an astronaut. It took him eight years from his first application and three rejections before he was accepted into the Astronaut Training Program.

He wasn’t always the brightest student, but he worked hard. While in his doctorate program at MIT, one of his professors told him that he might not be cut out for his program. But he knew what his goal was, and so he went to work.

There are two clear examples of his powerful will to overcome; having poor eyesight, and his mediocre swimming skills. Both of these situations could have prevented him from becoming an astronaut, but instead, he worked through them.

To become an astronaut you are rigorously evaluated. NASA had strict standards for what they considered acceptable eyesight. Even though he wasn’t going to be a pilot, he still had to pass NASA’s eye exam. There was only one problem, he didn’t have great eyesight.

When filling out his application for NASA he left the eyesight portion blank. However, this didn’t work, he would still need to be evaluated. He failed the exam and was medically disqualified.

A friend told him he needed to approach this problem like it was an engineering problem. He needed to collect all the facts and decide the best course of action.

Searching for a solution led him to an eye doctor who worked with him through a vision training program. He was given exercises to do every day to train his eyes to see better. He did this for seven months.

The exercises required deep concentration and he would stare at things without blinking for minutes at a time. The exercises were designed to help him relax his eyes. He said there were nights where his eyes were bloodshot because of the training. But he persevered.

He took the eye exam again and passed. He was back in the pool of eligible candidates.

After relating this story he said, “Getting your eyes to see better than they normally see is close to impossible. It was proof that no obstacle in life is too great to overcome.”

But what does this mean for our lives? Physically, it means a lot. We can train our bodies to react in certain ways. It isn’t easy and it takes time but we can take control. Another lesson is that sometimes we won’t always have someone to give us the answers. Massimino had to collect information and data, which eventually led him to the right doctor and methods.

Massimino eventually received the call he always wanted to have. NASA called and told him he had been accepted into the Astronaut Training Program. They informed him he would be receiving a packet soon with more information. The packet came. The first paragraph congratulated him on his acceptance into the program. The second paragraph told him to work on his swimming.

He couldn’t believe it. After the years of training, interviews, and applications not once did anyone ask him if he was a good swimmer. Massimino hated swimming, and he wasn’t very good at it.

The first test of the Astronaut training program was a swimming test. As part of the testing, they had to go through the Navy’s water-survival training program and pass other swimming tests. While being instructed about the tests, they were asked if anyone was a poor swimmer, in which, Massimino raised his hand. He was paired with a strong swimmer and was told to practice because no one was going to fail the tests.

This was a lesson in teamwork. There was a camaraderie amongst the candidates. If any of them failed, they all failed. So by pairing the strongest with the weakest, they were able to pass the rigorous exams. Now, being paired with a strong swimmer wasn’t the end-all. Massimino still had to get in the water and practice. But as with his eyesight, he was able to overcome the hurdle.

My takeaway here is the power of stories and media. The Right Stuff is a story about the early space program. It talks about the first group of people who were crazy enough to be strapped to a rocket. In Tom Wolfe’s words, this group was born with “the right stuff.” But this collection of stories completely altered the course of Massimino’s life. It sent him on a path to space.

Reading Spaceman changed my life, just like every other book has. Ralph Waldo Emerson once said, “I cannot remember the books I’ve read any more than the meals I have eaten; even so, they have made me.” I crave great stories and inspirational literature. You never know when you will be reading a book or watching a movie, and sudden life-changing inspiration comes to you as it came to Mike Massimino.

The Thing About Becoming an Astronaut

The probability of becoming an astronaut is so low that, statistically speaking, it’s nearly impossible. Per NASA’s website, there are currently only 48 active astronauts, or about, 1 out of every 6.9 million Americans.

I tried to consider what this statement meant for my own life. My career came to mind.

Massimino’s statement made me think of the so-called corporate ladder. Doors open and close as you move up the ladder. There is always the temptation to jump off the ladder and settle. However, I don’t think we should be so narrow-minded as to believe that there is only one or two eventual outcomes at the top of our chosen careers. Rather, there are endless possibilities for what we can accomplish.

The point I take away from all of this is that there is no manual for our career and goals. We should have some far-off, soul-stretching goals. But these are places we aim for. There is no clear-cut path. Rather, each day, month and year we make small decisions that get us nearer our goal. Massimino did those things which he felt would put him in the best position to be an astronaut, but nobody told him what to do. We should take initiative over our own careers and passions. We can’t let anyone decide for us what we should make out of our careers, or let them tell us there is only “one way to the top.”

That is the total time Mike Massimino was in space for. All of those years of training, learning, and practicing were for a little less than 24 days of actual performance.

Massimino made two trips to space. Both missions, STS-109 and STS-125, were Hubble Space Telescope servicing missions. It is estimated that NASA has spent roughly $10-15 billion dollars on the Hubble Space Telescope. Sending a crew into space to service Hubble was a long and expensive project. Things had to be perfect. NASA was sending astronauts into space on rockets to replace millions of dollars worth of equipment.

The book details how NASA would try to simulate the conditions that Massimino would face. He practiced the spacewalks and servicing he would perform. NASA suited him up and had him simulate the mission underwater and in special rooms. He mentally walked through each step and action he would take hundreds of times, so when the moment of performance came he excelled.

On his second mission, he was tasked with fixing the Space Telescope Imaging Spectrograph. As part of the repairs, he needed to remove a cover plate that contained 111 small screws. He first needed to remove a handrail. However, the final screw wouldn’t budge. He couldn’t get it off. NASA instructed him to use brute force to remove the handrail. Even with all the practice, he had to improvise in the moment. However, his training allowed him to be fluid and keep composure even when walking in space.

Control What You Can Control

Often, NASA would have astronauts from the past come and share wisdom with the astronauts. On one such occasion, Alan Bean came and delivered a message entitled “The Art of Space Exploration.”

Bean said that one of the hardest lessons for him to learn was to control what he could control. He said:

“You can’t control who likes you. You can’t control who gets assigned to flights or what NASA’s budget is going to be next year. If you get caught up worrying about things you can’t control, you’ll drive yourself nuts. It’s better to focus on the things right in front of you. Identify the places where you can have a positive impact. Concentrate there and let the rest take care of itself.”

This is sound wisdom for our own lives. There is a lot we can control, but there is just as much out there that we can’t control. Our attitude towards the things we can’t control can negatively affect our lives. We need to identify the places where we can have the most positive impact.

This section was a neat fact from the book.

It’s hard for me to label something as absolutely the all-time-greatest, but, I’m almost ready to admit that Radiohead’s OK Computer is my all-time favorite album. I love when I hear references to this great album (it happens more often than you would think). Mike Massimino talks about the music he listened to while in Space and he said OK Computer was his favorite to listen to at night (i.e., when he was looking down on the dark side of the earth). He believes that OK Computer was meant to be listened to in space. Unfortunately, I don’t think I will ever be able to experience it that way.

What would you listen to in space? After reading the book, I think Massimino put a lot of thought into the music he would listen to while in space. It’s also interesting to think that he wanted to use music during his private moments in space, to enjoy it on another level. The book gives great descriptions of what he was seeing and feeling while looking down upon the earth.

At the end of the day, Spaceman is a great story about a very inspiring man. Massimino is a great storyteller. You will be drawn into this story. You will be inspired to take control of your own life and to set the bar higher of what you can accomplish. I highly recommend this book to everyone!

You can pick up the book from Amazon here.