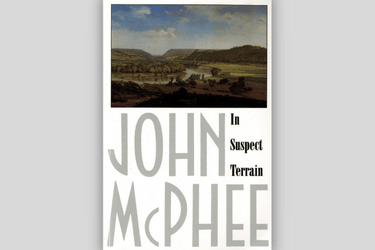 In Suspect Terrain is book two in John McPhee’s Annals of the Former World. He continues his drive along I-80 to explore the geological forces that shaped America.

This time he is accompanied by a geologist named Anita Harris. She pioneered using conodonts, which are toothlike fossils to help determine the age of rocks, and are very useful to the petroleum industry. A large portion of the book is dedicated to her life and work. She also doesn’t believe all the hype about the new (at the time) seafloor spreading theory and shares her concerns with McPhee.

Like Basin and Range (you can read my review of Basin and Range here), we get explanations of how America’s geology came to be. We learn why the tallest skyscrapers in New York City are clustered in certain areas of Manhattan. There is also a fascinating summary of how diamonds are created.

Another major topic of the book is glaciers. The part of the country McPhee is exploring (New York, Pennsylvania, Ohio, and Indiana) was largely shaped by the effects of glaciation.

Overall, I enjoyed this book. It’s not as good as Basin and Range, but it’s still good. I read both Basin and Range and In Suspect Terrain in a week, which was a lot of geology to digest. I will be taking a few weeks off before I read the third book in the series.

Do I recommend this book?

Like Basin and Range, you don’t have to be a geologist to appreciate this book. But it still might be an acquired taste. You should know McPhee is exceptional at writing about geology. His writing is interesting and engaging, and never dull, which can be hard to do with a work of science.