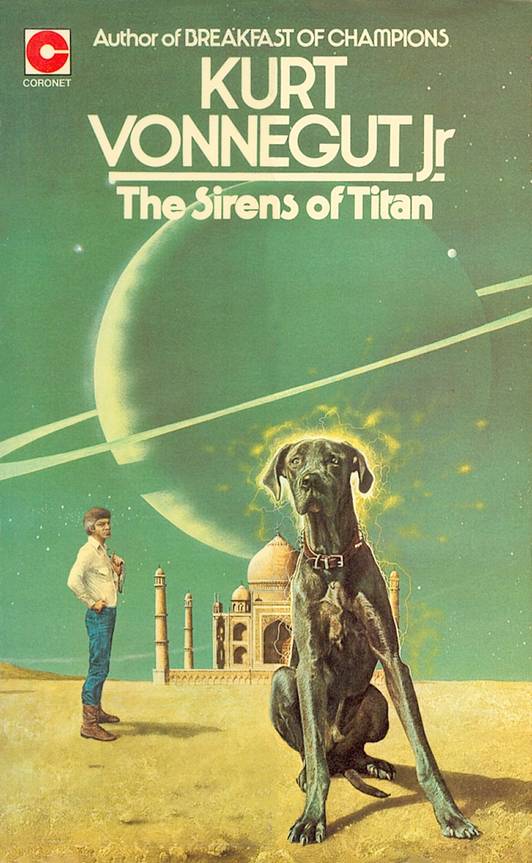 When I was a junior in high school something wonderful happened. I read a book called Slaughterhouse-Five by Kurt Vonnegut Jr. It was one of my first experiences with science fiction.

I had never read a book like this before. Every page was thrilling and stimulating. It was not a linear story. One of the first lines in the book is “Billy Pilgrim has come unstuck in time.” Yes, it is science fiction, but it’s also much more than that. It’s satire. It’s creative. It’s commentary on the world we live in. Kurt Vonnegut was describing the world in a way I had never heard, and science fiction was his method of doing it.

After finishing Slaughterhouse I needed more. I began to tackle the works of Kurt Vonnegut. His other books all continue his unique voice and view of the world. There was something cool about reading a Vonnegut book. I quickly became a fan. I have now read all 14 novels Vonnegut published.

Vonnegut was an important discovery for me. I became obsessed with his books, while at the same time becoming obsessed with reading. After I raced through Vonnegut’s works, I continued a fast-paced reading schedule. Vonnegut helped me develop the habit of reading many books.

Other than the Sirens of Titan, I haven’t read as much Vonnegut in recent years, yet he still remains one of my favorite authors. I want everyone to read Vonnegut because his books are perspective changing. On the surface, he comes off as a grumpy old man, but hidden in his books are sublime messages for humanity. Vonnegut was a humanist!

To help as a guide to reading Vonnegut I have ranked my favorites below. I’ve included brief thoughts about each. There will be no spoilers below and I will be short in my descriptions. Also included is my favorite quote from each book to help show off Vonnegut’s voice.

1. The Sirens of Titan

I have read The Sirens of Titan eight times, and I still get excited every time I start it again. I think this is Vonnegut’s most creative novel. There are so many moving parts. With repeated readings, you see how Vonnegut masterfully weaved an unbelievable story. He has a lot to say about free will and the universe in this book.

“A purpose of human life, no matter who is controlling it, is to love whoever is around to be loved.”

“I was a victim of a series of accidents, as are we all.”

So it goes. Vonnegut uses this phrase over one hundred times in Slaughterhouse-Five. Even though I knew it was coming it still drove home one of the themes of the book.

This is Vonnegut’s most well known book. It’s also his most important book. To some this is a great anti-war book. To others it’s just an entertaining sci-fi book. But regardless it’s a book that should be read.

“Everything was beautiful and nothing hurt.”

Bluebeard is Vonnegut on art. The protagonist is a pessimistic artist reflecting on his life. Look at enough art and you’ll never be wrong. This is a clear example of Vonnegut the cynic.

“Because of the movies nobody will believe that it was babies who fought the war.”

Cat’s Cradle is a great book. There are great characters and an unforgettable location. Vonnegut creates a whole religion, Bokononism. Another great Vonnegut literary device he uses is short punchy chapters. Chapters pile up by the page in this book.

“Tiger got to hunt, bird got to fly;

Tiger got to sleep, bird got to land;

Man got to tell himself he understand.”

In Mother Night, nobody is who they say there are. This is a book about pretending to be something you’re not.

One of the most Vonnegut things ever, is found on the inside jacket of Galapagos. It says that Vonnegut went on a cruise to the Galápagos Islands once. Out of that cruise came a very interesting story. This is Vonnegut on evolution.

“Just in the nick of time they realized that it was their own habitat they were wrecking — that they weren’t merely visitors.”

This is Vonnegut’s watergate novel. The protagonist is a low-level participant in the watergate scandal. Jailbird is one of Vonnegut’s most cynical novels. It’s also one of his most political.

“I still believe that peace and plenty and happiness can be worked out some way. I am a fool”

God Bless You, Mr. Rosewater is a major fan favorite. Kurt Vonnegut also listed this as one of his best works. I enjoyed it.

Player Piano is the most non-Vonnegut book. It was his first book, and it doesn’t have the Vonnegut voice. It’s astounding that by his second book, The Sirens of Titan, he had found his style which he would carry forward for the remainder of his life.

I still really enjoyed this book and think the story is great, even though it is a Brave New World knock off.

“I want to stand as close to the edge as I can without going over. Out on the edge you see all kinds of things you can’t see from the center.”

This might be my most controversial ranking. Many consider Breakfast of Champions as one of Vonnegut’s best. It’s Vonnegut’s most vulgar novel and was childish at times. The story is actually really solid and gives attention to one of  Vonnegut’s most recurring characters, Kilgore Trout.

I remember kind of liking this book. I was on some level entertained. However, Deadeye Dick doesn’t hold up to other Vonnegut novels

“That is my principal objection to life, I think: It’s too easy, when alive, to make perfectly horrible mistakes.”

12. Slapstick, or Lonesome no More!

Slapstick, or Lonesome no More was a hard book to get into. The characters were too bizarre for me.

All I remember about Hocus Pocus is that it has Vonnegut’s unique voice. Other than that I didn’t like this book that much.

Timequake was Vonnegut’s last book. I feel like Vonnegut had a lot to say in this book. He even described it as “stew.” However, I didn’t connect with much of it.

“I say in speeches that a plausible mission of artists is to make people appreciate being alive at least a little bit. I am then asked if I know of any artists who pulled that off. I reply, ‘The Beatles did’.”