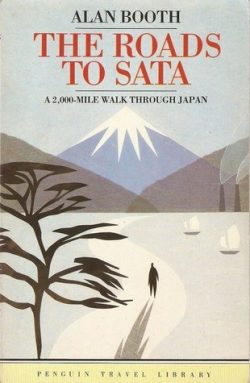 I recently uploaded a few videos to YouTube. I want to start posting short book review videos. There are some books that I love and I what to share my thoughts about them, but writing an article about them isn’t always feasible. Hopefully, I can share more about the books I love if I occasionally do some short videos.

Below is a video I made about the book The Roads to Sata. I posted the video a little over a month ago. I was recently reflecting on my notes from the book, and it reminded me of how enjoyable a read it was.

The Roads to Sata was written by a man named Alan Booth in 1985. The book is a travelogue about a 2,000-mile walk Booth took through the country of Japan. He writes about hundreds of interactions with the people of Japan. Some of the people are nice, some are mean. Most are very interested in a Gaijin (foreigner) who can speak the language fluently. The writing is masterful.

I found that somewhere between 10-100 people search for this keyword each month. That’s almost nothing (Google may even be rounding up).

How did I find this book? I bought a documentary from the Criterion Collection called The Inland Sea. I am generally interested in Japan and loved the movie. The movie is based on a book of the same name. Donald Richie, the author of the book, hopped from island to island in Japan’s Inland Sea in the 1960s. I purchased the book and loved it. Goodreads then recommended The Roads to Sata.

And just like that, I was led to a little known book, which I loved. In a span of one month, I read two books about traveling through obscure parts of Japan.

There is a very famous article called The Long Tail. It was written in 2004 and talks about how the internet has changed the way people find entertainment (and spend money). Because of the infinite shelf-space of internet stores, niche markets make sense now. It doesn’t cost online stores any money to electronically stock books about traveling through obscure parts of Japan, but before the internet, most bookstores would think it was too expensive to stock such a book (“No one is going to buy a book about walking through Japan in the 1980s!”)

“People are going deep into the catalog, down the long, long list of available titles, far past what’s available at Blockbuster Video, Tower Records, and Barnes & Noble. And the more they find, the more they like. As they wander further from the beaten path, they discover their taste is not as mainstream as they thought (or as they had been led to believe by marketing, a lack of alternatives, and a hit-driven culture).”

I wish there was an easy way to find great niche content like The Roads to Sata. But the only method is to experiment with different styles and interests and “wander further from the beaten path.” The more I read the more I find myself walking down these niche paths. Mainstream books are great, but it’s thrilling to read a book, like The Roads to Sata, that 99.99% of the world has never heard of, but is of the highest quality.

Anyway, here is the review I posted on YouTube.

If you are interested in reading The Roads to Sata you can purchase it from Amazon here.