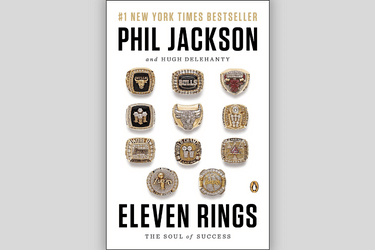 Basketball is my favorite sport, but I haven’t read that many basketball-related books. It’s weird how two of my favorite hobbies have yet to intersect.

I decided to change that, so I picked up coach Phil Jackson’s book Eleven Rings. It was one of the most highly rated basketball books out there.

The book is about the Eleven Rings (or championships) Jackson won as coach of the Chicago Bulls and Los Angeles Lakers. He gives a brief history of his early life growing up in a strict Pentecostal household in Montana, and how he excelled at basketball at a young age. He spends some time talking about his time as an NBA player, and the rest of the book is focused on his coaching.

I enjoyed this book. I didn’t realize how intellectual Jackson was. He reads frequently and deeply. He gave personalized book recommendations to every one of his players. Funny enough, he said both Michael Jordan and Kobe Bryant didn’t read the books he recommended to them.

Who Should Read Eleven Rings

As I read this book, I saw two groups of people this book could appeal to.

First, general basketball fans. Phil Jackson is the greatest NBA coach of all time. He also coached two of the biggest basketball superstars of all time; Michael Jordan, and Kobe Bryant.

He won 11 NBA titles, a record that won’t be broken anytime soon. He wrote this book to discuss those championship teams. There are plenty of behind-the-scenes details. He also shares his approach to coaching and how it helped to lead to those titles.

One of my favorite parts of the book is when Jackson is discussing the differences between Michael Jordan and Kobe Bryant. He worked with them every day and shared insights I never knew.

Here are a few of the highlights of what Jackson wrote about Kobe and Jordan.

Michael Jordan was a superior leader, who was masterful at controlling the “emotional climate of the team.” Even though he was hard on his teammates he led them tactfully.

Kobe Bryant took longer to develop as a leader. I think Coach Jackson was implying that Jordan had natural leadership talents that he arrived in the NBA with, but Kobe took years to learn how to be a leader and how to deal with relationships on the team.

Jackson highlights the resilience of Kobe and Jordan. Some of their best games were under intense pain (such as Jordan’s famous Flu Game).

Jordan was stronger and used that strength to create shots. Because Jordan had bigger hand he could use them to create ball fakes, which were unguardable. Kobe was not as strong, but was more flexible, and would use “finesse” to create shots.

Jackson talks about how the sports trainers viewed the difference between Kobe and Jordan. He said that Kobe was known as someone who treated his body like a machine. He wouldn’t let impurities enter his body and he strongly regimented his body. Jordan, however, would “indulge his tastes” with cigars and wine. The trainers still commented that even with these differences, they never saw someone move like Michael Jordan.

I never thought of Michael Jordan as being a more accurate shooter than Kobe but he shot 5% better from the floor than Kobe did. In Eleven Rings, Jackson notes that Jordan would not over play his hand in the game. He would let the game come to him. Kobe, would force shots more often, regardless of how the game was playing out. Jackson did say that Kobe could get “heat” up better than Jordan.

The second group of people who would enjoy this book is leaders and business people.

Jackson is a unique guy in the coaching world. He incorporated mediation and Native American spiritual practices into his coaching sessions. He tells in the book why he did these things.

Each season, he tailors his coaching style to meet the needs of his players. He had to deal with big egos and intense pressure.

If you read this book you can learn how the most successful North American professional coach of all time led his teams.