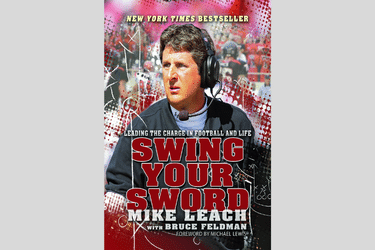 You hear the word “evolve” used often to explain how a sport changes over time. It seems that every decade schemes, priorities, and strategies change in a sport and the game evolves. In the last decade, basketball teams started shooting more threes. A decade before that, college football teams started throwing the ball all over the field.

Sometimes you need an outsider to evolve a sport. Coach Mike Leach is one such outsider. He never seriously played football, yet he is the poster child of the “air-raid” offense. Some of the greatest passing seasons in NCAA history have come under his tutelage.

Swing Your Sword is Leach’s memoir. In it, he tells his life story. Before coaching he was in law school. It was there he had a eureka moment. Leach reached out to a famous lawyer named Gerry Spence and asked him if he loved being a lawyer. Spence wrote back to him saying he was “consumed by law.” After Leach reflected on what consumed him, he realized it wasn’t law, but rather it was football. Instead of practicing law after graduating, he decided to become a football coach.

The book recounts the many stops Leach had as a position and assistant coach. He spent a lot of time in D-2 and the NAIA. It is at these smaller schools, which Leach began to develop his offense that became known as the “air-raid.”

He eventually was hired at Texas Tech University to become the school’s Head Coach. His innovative offense turned the program into an entertaining show. Almost every year, Leach’s quarterback would lead the country in total passing yards. He led the team to a bowl game every year for 10 years and won an average of 8 games per year.

Leach was eventually fired after a controversy surrounding one of his players named Adam James. He spends the last few chapters telling his side of the story. It’s been over ten years since the controversy and it is well established that the charges against Leach were fabricated and exaggerated. Included in the appendix are emails that show how Leach was wrongfully terminated.

Mike Leach wrote this with journalist Bruce Feldman. Feldman actually ended up losing his job from ESPN because of his association with this book. When famous people team up with professional writers it can cloud the story. It makes me question whose words I’m really reading. I don’t know to what extent Feldman influenced this book, but it sounds like Leach throughout its pages.

I thought Swing Your Sword was an exceptional book. Leach is leading an intellectual revolution in football, and I enjoyed learning how Mike Leach thinks. I also enjoyed learning about how he leads his team. He genuinely cares about developing his players, and his teams have some of the highest graduation rates in all of College Football. I hope he comes out with another book to recap his life at Washington State and Mississippi.