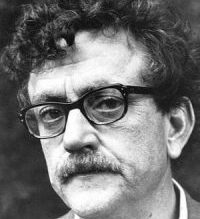 Kurt Vonnegut is one of my all-time favorite authors. His books left a lasting impression on me as a youth when I began reading his books. I still read a couple of Vonnegut’s books every year.

As I became more interested in collecting books, specifically leather-bound books, I wanted to have leather-bound copies of Vonnegut’s novels to enhance my collection.

Kurt Vonnegut is a favorite author among leather-bound book collectors. His books hold their value well and remain in high demand. He also had a unique signature, that matched his writing style, which can be found in many versions of his leather-bound books.

I haven’t been able to find a definitive list of all the leather-bound Kurt Vonnegut books published. So I have compiled my own list of his published works by The Franklin Library and Easton Press. I wrote about the main leather-bound book publishers here.

If you know of any other Kurt Vonnegut leather-bound book editions, let me know and I will add it to the list.

The following list has the book titles, year published, and whether signed editions were offered. I’ve also included the number of copies of signed editions out there (this information was harder to find). I’ve also added a few distinguishing characteristics of the books.

The following is a list of Kurt Vonnegut’s book’s which were published by Easton Press. Each book may have signed and non-signed versions. The later signed-versions are numbered on the signature page.

I own two Franklin Library Vonnegut’s: Bluebeard (signed) and Jailbird.