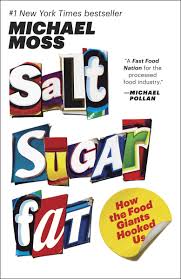 Salt Sugar Fat is a book by Micheal Moss that looks at how the food industry has used three simple ingredients to manipulate the way we eat. It is an engaging book that dives deep into the history of salt, sugar, and fat.

In many ways, the story of this book is about trade-offs. Americans wanted convenience when it came to their food, and the giant food companies were more than willing to supply it. But to extend the shelf-life and convenience of our food, the companies had to revamp their use of salt, sugar, and fat. This led to new concoctions, lab-altered sugar that was sweeter, fat that was more addictive, salt in ever-increasing amounts. The companies also increased their use of high-level mathematics, learning how to precisely calculate the most addictive, best-tasting food possible, and how to market it to the masses.

As Americans became more health-conscious in the early 2000s, the food industry had to scale back, but they still did a lot of things behind the scenes. For example, they would label a product as “low sugar”, while at the same time boosting the salt or sugar content of the product.

The book highlights these questionable practices and explains how we got to this point.

Michael Moss did a lot of research for this book. He visited scientists in the labs and read numerous research papers. Even the big food companies let him into their labs (why did they agree to this?). In one instance, Kellogg made Moss a salt-less version of it’s Cheez-Its. Without any salt, they felt like “straw, and chewed like cardboard and had zero taste.”

Remove the salt, sugar, and fat, and processed food is nearly inedible.

There are a lot of factors that have made people more hooked to salt, sugar, and fat. Below are a few takeaways about each ingredient.

Salt is important for taste. Moss said that all the additives being used in food processing usually leave the food tasteless and gross, so salt is used to mask the bad taste. Salt is so magical that without it Cheez-Its would taste like cardboard, and ham would bounce like rubber.

Salt isn’t a natural craving for us like sugar and fat are. We come to learn how to like salt. From day one, babies like the taste of sugar, but give them salt and they don’t like it. However, sodium is essential to our bodies, but nowhere near the amount that is consumed today.

The salt shaker isn’t the problem. Processed food is. A famous study from 2008 said:

“Most processed foods are rich in sodium, and there is little incentive for the food industry to minimize the sodium content of processed food as salt facilitates manufacturing procedures and aids in preservation. Around 77% of our salt intake comes from processed and restaurant foods.”

Of the three ingredients, salt is the easiest to give up. Studies have shown that when people cut back their sodium intake they eventually lose the craving for more salt. Foods high in sodium begin to taste too salty for them.

The book describes the term “bliss point.” This is an industry term, which represents the point where the mathematically precise amount of sugar is in a product. Most things you enjoy are at this bliss point. Rest assured, that every product in stores has been heavily tested to know the optimal amount of sweetness.

Moss says that sugar sweetens food, but it also replaces costlier ingredients. For example, it is added to ketchup to replace tomatoes, it adds bulk and texture.

Sugar is highly addictive. The neurons in our brain fire up the same way they would for a drug addiction, like cocaine or heroin, when we eat sugar.

The sugar sections of the book also talk about the marketing campaigns these companies use, especially when it comes to directing their efforts to children. Young children crave sugar. It is postulated that their rapidly growing bodies crave the energy sugar can provide. Studies have shown that children prefer sweeter foods than adults. Other studies have shown that children who consume a lot of sugar as a child will likely continue that habit for the rest of their lives.

The soda industry has a term called “line-extensions.” This is when a soda has a new flavor –  think Cherry Coke or Vanilla Coke. Line extensions are used to bring buzz to the brand, and usually increase the sales of the flagship product.

Coke and Pepsi had been creating line extensions for years. However, Dr Pepper never varied from the original flavor, but it began to lose market share to Coke and Pepsi in the early 2000s. Because of this Dr Pepper turned to the famous marketer Howard Moskowitz to help create a new line extension. Moskowitz is a legend in the marketing industry. His work with spaghetti sauce was highlighted by the author Malcolm Gladwell in this TED talk.

Moskowitz specializes in marketing segmentation – which means breaking up customers into groups and segments. His work has helped show that there is no perfect “bliss point” for food, instead, people have different preferences, which can be grouped into different segments. For example, there is an optimal bliss point for people who like chunky spaghetti sauce.

To create the flavor, Moskowitz and Dr Pepper came up with 61 different potential flavors, which all varied slightly from each other. Tasters were then brought in to help determine the optimal flavor. The eventual flavor Dr Pepper used became an overnight success.

The book discusses how this kind of marketing leaves the food industry to continually try and find the bliss point of products. Many times, it means companies use more sugar and less flavor. In the Dr Pepper example, the Dr Pepper flavoring syrup was considerably more expensive to create than just adding sugar. Moskowitz showed the company that they could cut back the flavor syrup and use sugar, while at the same time moving to a more optimal bliss point.

Another interesting take away from Moskowitz’s research is that we like strong-flavored foods only so much. Rather, we like tastes that are alluring, but overall, don’t have too many strong flavors. Sodas are optimized around this thought. The flavors are sweet but they aren’t created to be overpowering. It’s a perfectly optimized flavor that keeps us coming back for more.

The use of “juice concentrate” is another deceptive practice that the food industry uses.

According to Salt Sugar Fat, the steps to make juice concentrate are this:

What is left is what is sometimes called “stripped juice”, which is almost entirely sugar and is devoid of fiber and vitamins. The problem with this practice is that companies can still label a product as “contains real fruit” when using stipped juice.

Fat plays an interesting role in processed food. It stimulates overeating (more sales, more profits) and improves mouthfeel. People love fatty foods, but it is hard to tell how much fat is in food. We see a greasy hamburger and know it’s fatty, but not all fat is so easily discernable.

A study was done in which the participants were given foods with varying amounts of sugar and fat. The participants were easily able to identify when sugar was increased in food, it’s easy to tell when something is sweeter. However, when it comes to fat in food, they couldn’t tell when a portion of food had more fat in it. Fat is easily hidden.

Humans like fat, but they can’t tell when more of it is hiding in their food. Food companies use this to their advantage. A lot of foods high in sugar are also high in fat, but consumers consider these foods high-in-sugar and don’t identify them as high-in-fat.

The fat section of the book takes a big look at cheese. It details the history of the dairy industry and how processed cheese came to be. The food industry quickly learned that Americans love processed cheese. It is the biggest source of saturated fat, one of the bad fats, for the average American.
On average, Americans are eating nearly 40 pounds of cheese a year! That’s enough calories to sustain an adult for over a month. I created this chart using publically available information from the USDA, to show how American’s cheese usage has doubled in only four decades:

The book details how the U.S. government played a role in increasing cheese consumption. The government promised to purchase any extra cheese cheese-makers produced, to help stabilize dairy farm incomes. This backfired in the 1980s when farmers realized they could produce as many dairy products as possible and the government would continue to purchase them. This led to an inventory problem. It is estimated that the stockpile swelled to over 500 million pounds of “government cheese”, which was housed in 150 warehouses in over 35 states, including underground caves near Kansas City. The government eventually had to give nearly 300 million pounds of cheese away for free.

The fat section also talks about the meat industry. The meat industry uses a by-product called pink slime to help reduce the fat content of meat. Currently, the United States allows for ground beef products to contain up to 15% of pink slime before it has to be called out on the label. However, pink slime has declined over the last eight years, after media attention brought it to light in 2012.

I really enjoyed this book. Salt Sugar Fat inspired me to reconsider my own eating habits. Before the book, I looked at a food’s sugar content, but now I understand the importance of checking the sodium and fat content as well.

Overall, I was really happy with the investigative style of the book, and I felt I could trust Micheal Moss because I knew he looked at it from all angles and did his research.

However, don’t expect this book to give you the answers to what you should eat instead of highly processed foods. Rather, this book gives you the facts of salt, sugar, and fat, and not much else.

You can pick up a copy of Salt Sugar Fat from Amazon here.