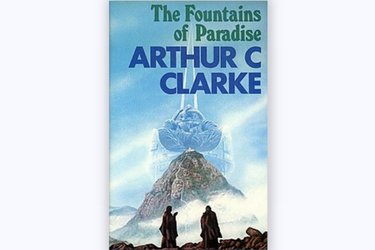 Stories of grand engineering feats have been a common theme of mankind’s history. The Tower of Babel comes to mind. A tower to the heavens! How grand and ambitious. Also, consider the pyramids of Egypt or the standing stones of Stonehenge. These engineering marvels are all linked with a great story and mystery. Not only are humans storytellers, but they are also builders.

So what are the next great engineering feats? What does the future hold?  Science fiction has always been a way for us to look to the future and to ask what we could build if there were no limitations.

In The Fountains of Paradise, Arthur C. Clarke gives us a peek into a possible future, one with an engineering feat on a colossal scale. An endeavor so big that the Earth can’t even contain it. He wants to build an elevator to space.

It is the 22nd century and humans have become a space-traveling species, but the cost of sending rockets into space is becoming unbearable. There is also considerable debris from all the rockets. Vannevar Morgan is a visionary with a solution. He proposes to build a structure known as the “orbital tower,” and it will link the ground with a satellite in orbit. The elevator will allow payloads to be lifted into space without the need for expensive rockets, thus solving one of Earth’s biggest problems.

The Fountains of Paradise is a masterwork that tells the story of the construction of this marvel. To tell this story Clarke gives us three stories. The first is the story of the construction of the tower. The second is about King Kalidasa (the story is based on the real-life King Kashyapa I), who lived thousands of years in the past and is trying to build his own engineering marvel. The third story is set in the future and describes a visit from aliens. The novel jumps back and forth between these three stories but spends the most time telling the story of the tower.

This is the fourth book I’ve read by Arthur C. Clarke. He worked ambitious ideas into his books. The books I’ve read are 2001 A Space Oddysey, Childhood’s End, and The City and the Stars. In both 2001 and Childhood’s End, we don’t get a strong main character. Instead, we get stories that have new characters but are all related. The Fountains of Paradise is similar, the big idea of the novel is the tower, and not necessarily the development of any characters. But the book still works. It makes you think big.

Check out my one minute summary of The Fountains of Paradise on YouTube.

If you are interested in reading and purchasing The Fountains of Paradise you can purchase it from Amazon here.